On Saturday the 11th of August just over 1 250 riders will line up for the Trans Baviaans Race, in the 15th edition of the toughest team single stage MTB race in the world. Headlining the field are past champions, members of the South African team to the World Marathon Championships and the newly crowned South African marathon champion. Mountain biking fanatics will be able to follow the action, as it unfolds live, on the race’s social media handles and the event website: www.transbaviaans.co.za. 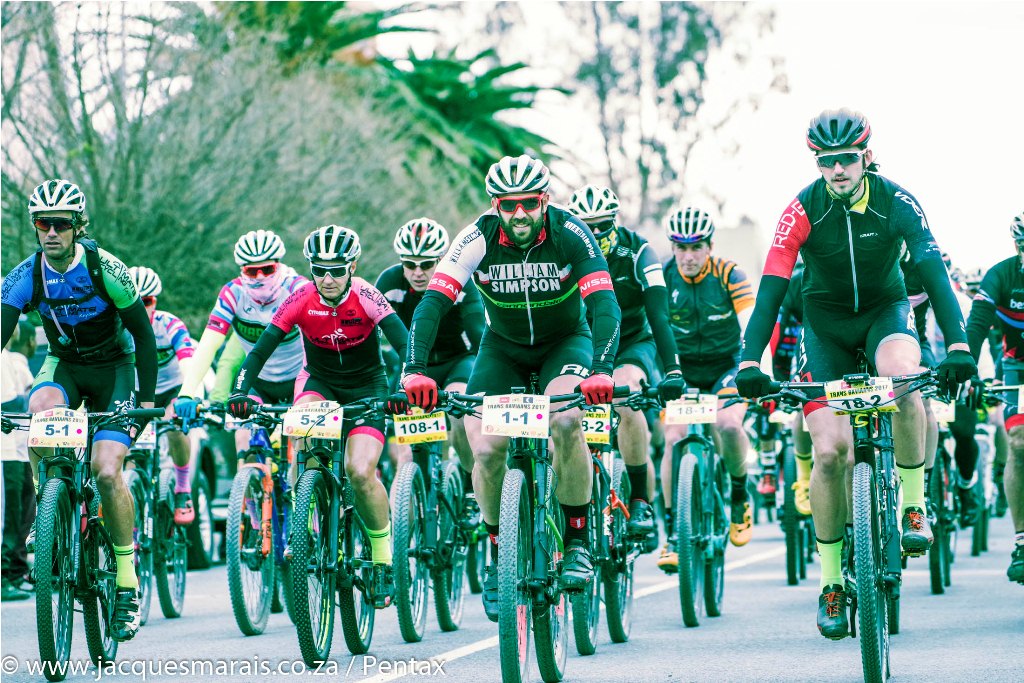 The 2018 Trans Baviaans will feature a number of familiar faces at the sharp end of the field including Neill Ungerer, Yolande de Villiers, Mike Posthumus and Timothy Hammond. Photo by Jacques Marais.

Given their recent results it is hard to look past Heyns and Arno du Toit, who will be riding as DSV Pro Cycling, for the title of favourites. Heyns was crowned South African marathon champion in July has ridden the Trans Baviaans before, but only socially, while his teammate Du Toit is making his debut. “I don’t really see the national jersey as adding any extra pressure as I feel me and Arno (du Toit) are still very new to this racing format,” Heyns said ahead of the race. “We have a lot to learn so in a way I don’t think we should necessarily be considered as favourites. The Trans Baviaans is very different to any other marathon race and I don’t really know what to expect, but I’m looking forward to my first race in the new jersey” he concluded, playing down his and Du Toit’s chances. 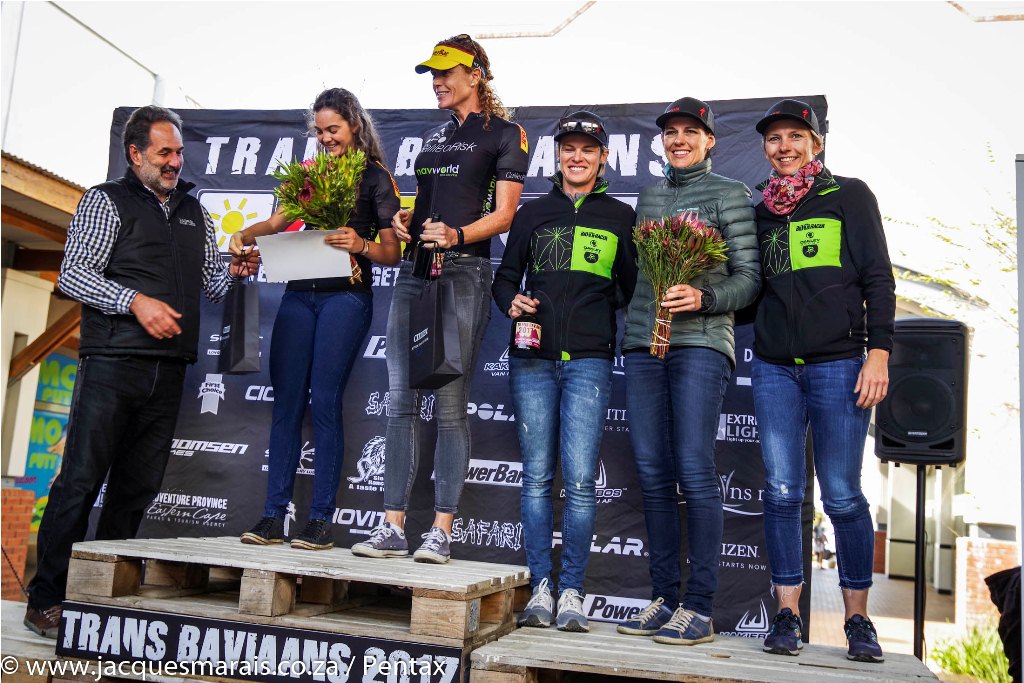 Sarah Hill and Theresa Ralph have their sights set on beating their 2017 winning time by at least an hour. Photo by Jacques Marais.

A pair who calmly own the pre-race favourites tag are the Insect Science/Garmin team of Hammond and Swanepoel. “I do feel a bit calmer with each year I race the Trans Baviaans, I know what needs to be done now. That being said, it doesn’t make it any easier on the day” confessed the course record holder and defending champion. “This year has an incredibly strong field which is exciting so I don’t think we will be the targets specifically. It’s the type of race where you should ride your own pace, if you let someone else dictate your pace your wheels will fall off later on. Jaco (Ferreira) and Hansie (Joubert) showed that last year when they nearly rode back to us in the final 20km’s” Hammond elaborated.

Picking up the explanation Swanepoel continued: “Tim and I have been looking for an opportunity to race together for a while. So I am glad things allowed us to race Trans Baviaans as a team. Tim’s experience at the event will be a big asset to us because the Trans Baviaans is all about teamwork. When you race 230 kilometres all members of a team will have highs and lows, so I guess it’s all about surviving the lows and capitalising on the highs to bring out the best in each individual.” 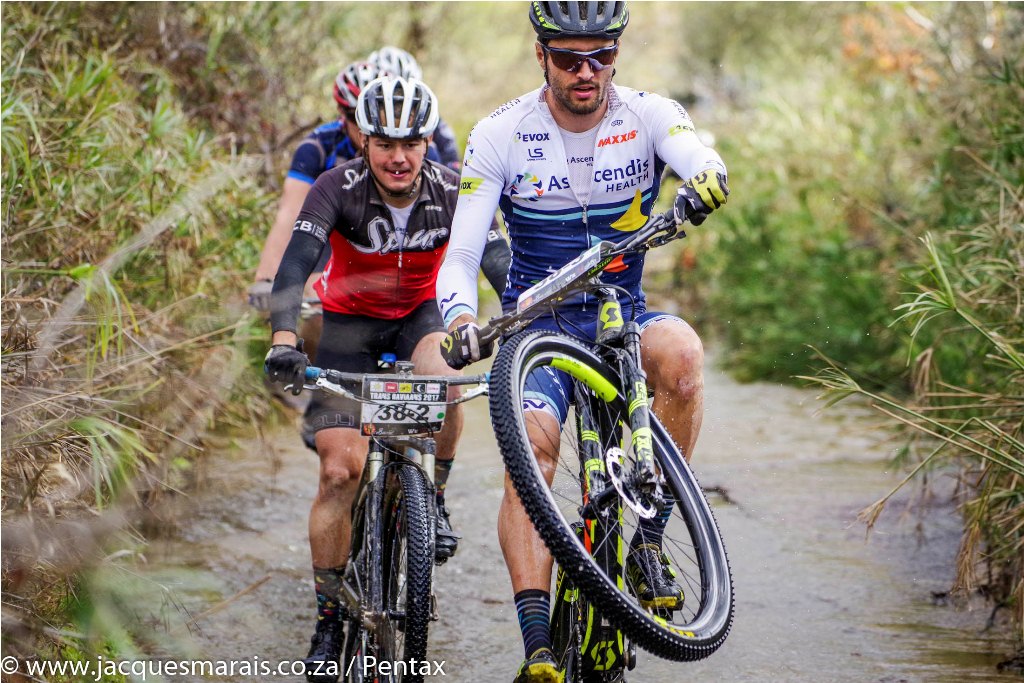 Gert Heyns will be riding the Trans Baviaans competitively for the first time this year. Photo by Jacques Marais.

A quartet who know all about the challenges of managing the physical, psychological and especially mechanical difficulties of the race as a team are the Ellsworth ASG squad of Kachelhoffer, Seyffert, Armand Swanepoel and HB Kruger. Three of the four completed the Trans Baviaans together last year and the addition of HB Kruger, who has been selected to represent South Africa at the Marathon World Championships in September, has further strengthened the team. “Trans Baviaans being a 230 kilometer MTB race is all about tactics. It starts with who you select as a partner. This year we will be a four-man team,” Kachelhoffer stated. “It’s the first time HB (Kruger) will do the race, but after his second place finish in the African jersey competition at the Absa Cape Epic, we are confident he will be a big asset to our team. Last year we got a puncture and lost valuable time. Though we know having four riders in a team, means we have to look after eight wheels and the chances of a flat wheel are greater; but in the same breath, having four riders also means we have more depth should conditions on the day demand more team work” the Ellsworth ASG rider expounded.

The 2017 runners up Joubert and Ferreira come into the race with more attention focused on them, but also with more experience and better preparation. “Fitness most certainly plays a role, but it becomes a mental game as the distances increase” Ferreira responded when asked how he and Joubert manage to compete with full-time elite riders. “It’s about how well you pace yourself and manage your body throughout the entire 230 kilometres, compared to only a ‘sprint’ 50-80km event. Knowing the route most certainly adds an advantage as well” he smiled. 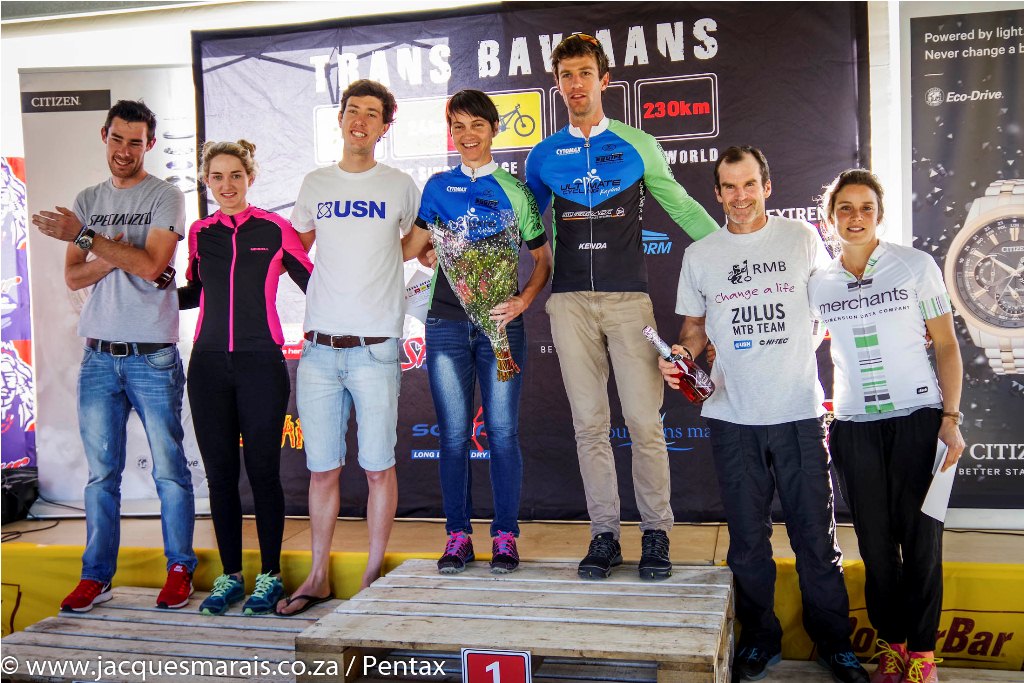 Yolande de Villiers and Neill Ungerer are no strangers to the top step of the mixed category podium. Photo by Jacques Marais.

Hoping to exploit their experience and route knowledge to the full will be the PowerBar team of Stermin and Studer. The pair has won the Repeat multiple times over the last few years, but work schedules have never allowed them to match themselves against the more competitive field of the Race. It will be interesting to see if their familiarity with the event provides them with a racing edge on Saturday the 11th. Another fascinating battle within the race is the one between coach and athlete, which plays out between Posthumus and Heyns. The Team William Simpson duo of Posthumus and Smith will be eager to out-do, the highly regarded sport scientist, Posthumus’s athlete Heyns and his partner Du Toit. “I also expect Derrin (Smith) and Mike (Posthumus) to be fast and I’ll definitely feel some pressure not to be beaten by my own coach” Heyns laughed.

In the women’s race the defending champions Theresa Ralph and Sarah Hill, riding for Galileo Risk, are out to knock an hour off their 2017 winning time. “Trans Baviaans is a magical race that is never the same” the three time winner Ralph said. “I have experienced a wet Trans, a dry Trans and a very bumpy Trans. All provided their own challenges. It is possibly those jaffels, at check point seven, that keep bringing me back though. This year Sarah (Hill) and I have a goal to better our time by an hour and hopefully we will do that as Sarah has grown from strength to strength over the past year and we will definitely be much faster” she elaborated. 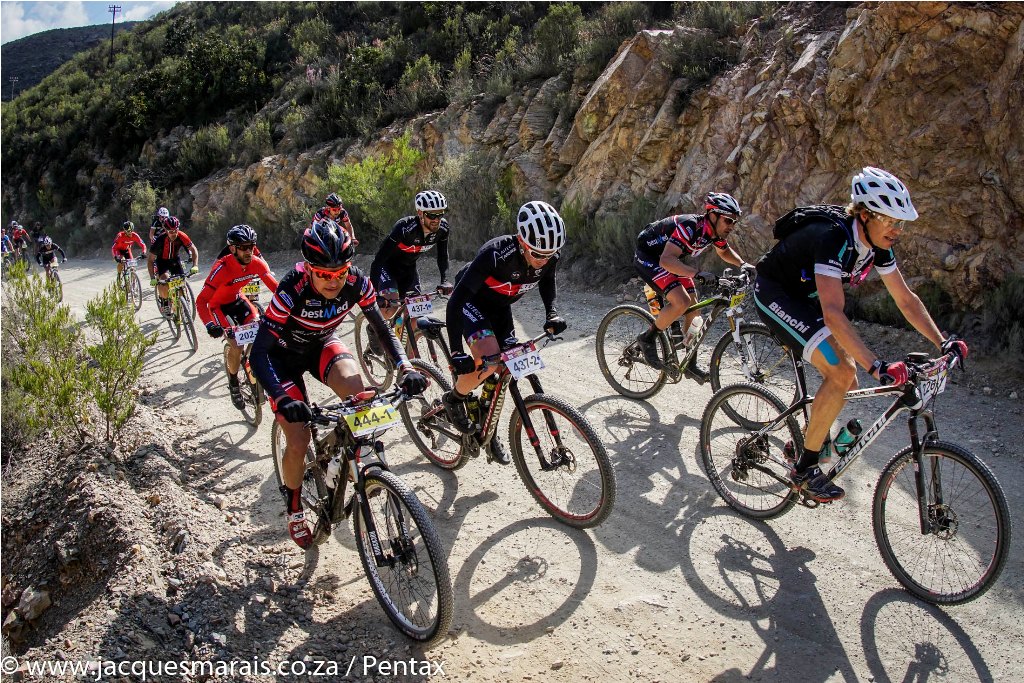 As in the women’s race the mixed category sees one team stand head and shoulders above the rest as race favourites: the Ultimate Cycling Knysna team of Yolande de Villiers and Neill Ungerer. “The mixed category is very difficult especially for the woman” De Villiers, who was also recently selected to represent South Africa at the Marathon World Championships, revealed. “I am usually in my red zone all the way just trying to hold on to Neill (Ungerer’s) wheel. But I’m very fortunate to have Neill as a partner, because he is always looking after me asking me if I am all right and if the pace is good. Communication is very important and telling each other when you go through a bad patch” she advised to less experienced Trans Baviaans riders.

Racers and riders hoping to simply finish in a good time alike will be pleased to know that the weather conditions for the Trans Baviaans Race are looking advantageous for a fast time. There is no rain predicted throughout the event; while in Willowmore and the Baviaanskloof the expected temperatures range from 5 to 17 degrees centigrade, with a light to gentle breeze from the north west blowing throughout the morning and afternoon. In the evening once the teams have crossed into the coastal region approaching Jeffreys Bay the mercury is predicted to read between 18-14 degrees, with a light tail wind blowing from the north east. 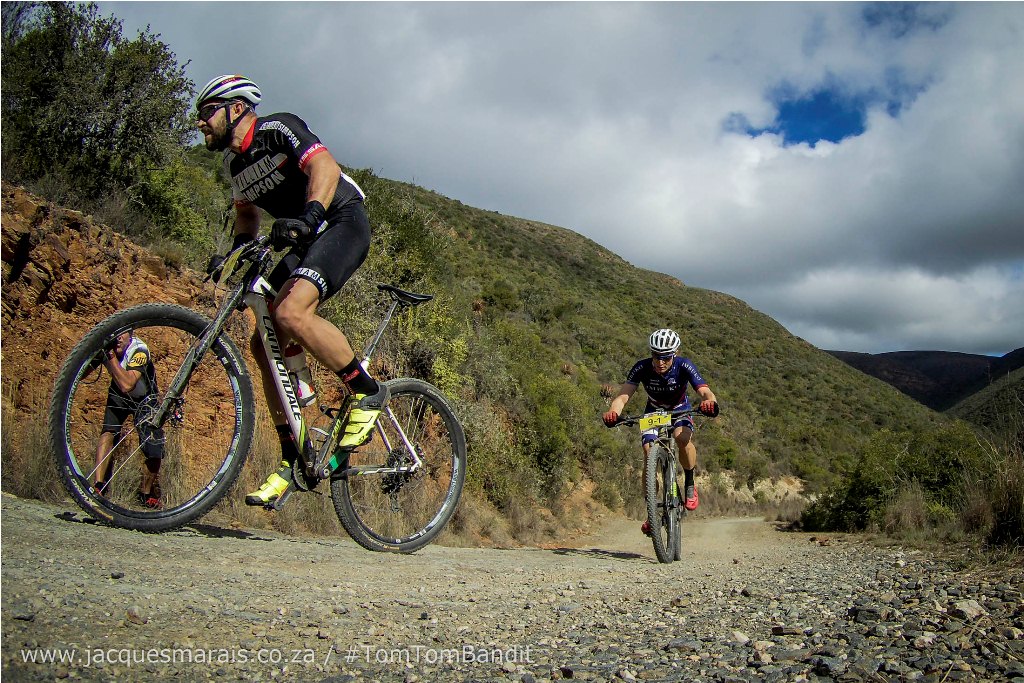 The famously powerful Mike Posthumus will be teaming up with Derrin Smith as Posthumus takes one of his charges, Gert Heyns. Photo by Jacques Marais.

Riders are encouraged to keep an eye on the race’s social media channels and the EcoBound Explorer mobile application, for iPhone and Android devices, for updates on the road and weather conditions closer to the time. While mountain biking fans are reminded that they will be able to follow the action live on the race website, www.transbaviaans.co.za. Alternatively they can share in the Trans Baviaans experience by liking the Facebook page, Trans Baviaans, following the Instagram handle, @transbaviaans, and the EcoBound Twitter handle @EcoBoundMTB. 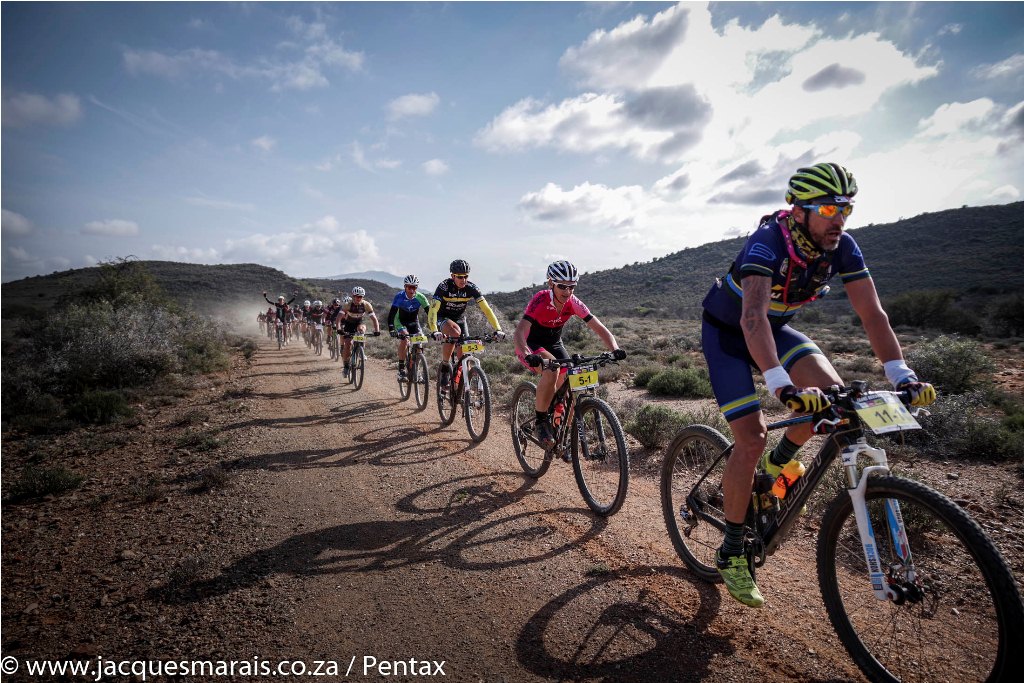 Saving energy and hiding from the wind is the aim of the game in the first 100 kilometres of the Trans Baviaans. Photo by Jacques Marais.

Ciovita Apparel to beat the Winter Chill
Scroll to top